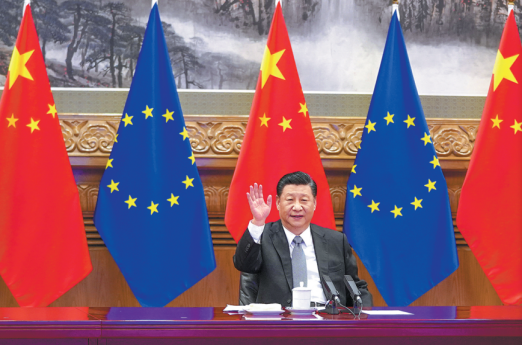 It will promote recovery of the world economy in the post-pandemic era, facilitate global trade and the global economy, boost the international community\'s confidence toward economic globalization and free trade and make important contributions to building an open world economy, he added.

Xi noted that China is dedicated to building a new development paradigm, which will bring more market opportunities and greater space for cooperation for Europe and the whole world.

The conclusion of negotiations for the EU-China investment deal is a milestone for Europe-China relations, the leaders said. It will promote global economic recovery, they said, adding that it also proves that although Europe and China have disagreements on some issues, both sides have the will to enhance dialogue, deepen cooperation and achieve win-win cooperation on the basis of mutual respect.

The EU appreciated China\'s measures in dealing with climate change and fighting pandemics, and the two sides should enhance cooperation on such issues as disease control, climate change, biological diversity, sustainable development and reform of the World Trade Organization, they said. By AN BAIJIE in Beijing and CHEN WEIHUA in Brussels | CHINA DAILY |