What’s different about the surface mining and underground mining?

What’s different about the surface mining and underground mining?

Surface mining is only economic when the coal seam is near the surface. This method recovers a higher proportion of the coal deposit than underground mining as all coal seams are exploited - 90% or more of the coal can be recovered. Large opencast mines can cover an area of many square kilometres and use very large pieces of equipment, such as draglines, power shovels, large trucks, bucket wheel excavators and conveyors.

The overburden of soil and rock is first broken up by explosives; it is then removed by draglines or by shovel and truck. Once the coal seam is exposed, it is drilled, fractured and systematically mined in strips. The coal is then loaded on to large trucks or conveyors for transport to either the coal preparation plant or direct to where it will be used.

Coal mining is only a temporary use of land, so it is vital that rehabilitation of land takes place once mining operations have stopped. In best practice a detailed rehabilitation or reclamation plan is designed and approved for each coal mine, covering the period from the start of operations until well after mining has finished. 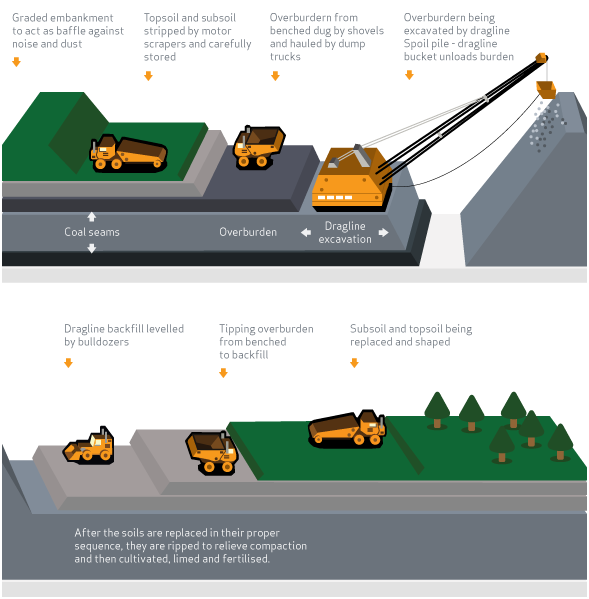 There are two main methods of underground mining: room-and-pillar and longwall mining.

In room-and-pillar mining, coal deposits are mined by cutting a network of 'rooms' into the coal seam and leaving behind 'pillars' of coal to support the roof of the mine. These pillars can be up to 40% of the total coal in the seam - although this coal can sometimes be recovered at a later stage.

Longwall mining involves the full extraction of coal from a section of the seam, or 'face' using mechanical shearers. The coal 'face' can vary in length from 100-350m. Self-advancing, hydraulically-powered supports temporarily hold up the roof while coal is extracted. When coal has been extracted from the area, the roof is allowed to collapse. Over 75% of the coal in the deposit can be extracted from panels of coal that can extend 3km through the coal seam.

Technological advancements have made coal mining today more productive than it has ever been. To keep up with technology and to extract coal as efficiently as possible, modern mining personnel must be highly skilled and well-trained in the use of complex, state-of-the-art equipment.